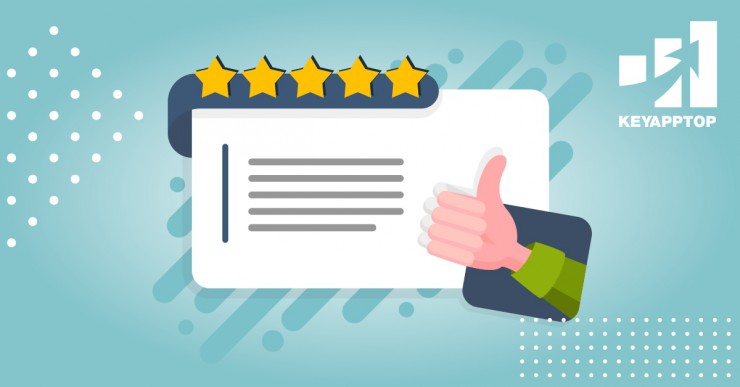 How to increase your app’s ranks on Google Play?

Since 2012, all reviews left on Google Play belong to real people. There are now services where you can purchase reviews. To use such services or not is your choice.

Google does not explicitly state that if they notice that you are paying people for feedback, they will delete your application. It makes sense to turn to such services when your application is not popular enough to rise at the expense of organics. And it really works.

A more civilized way to get more reviews will be the message «Do you like the game? Rate us!». There are a couple more tricks, about them another time.

Here’s an interesting thing – if you persuaded a hundred of your friends to install the application on the first day after launch, you have the chance to loom all over the next day in the Top Gaining Top in your small but proud country. If you are lucky and if your game is good enough, there is a chance to consolidate your success. More installs – higher rating. Higher rating – more installs.

And the application rises to the top by itself! This is exactly what you should strive for, bearing in mind, though, that the top «Gaining Popularity» is not shown in every Google Play interface.

It is also known that the data in Google Play is collected and evaluated for the month. Applications with good dynamics of installs are raised in the rating (and they are lowered from the bad one, we do not forget about it). Thus, it is necessary to maintain acceleration for a month (or at least not to drop), and it will be easier to hold on the next month.

The more the better. Good rates are better than the bad ones. A lot of average ratings are better than a few good ones. At one of the mobile conferences, LinguaLeo shared a successful, experienced enhancement of metrics on mobile devices and came to interesting conclusions that the average rating is higher than four stars does not affect anything. This roughly corresponds to the perception of a typical user: five stars — a miracle, four stars — OK, three stars — sucks, two stars — failure, one star — it did not run.

The best results have the applications that were published less than a month and more than two years ago. Applications that were updated less than a month ago, go to a higher position. From this, you can make a very reasonable and correct conclusion that your app needs to be updated at least once a month, especially since no one will keep you waiting for two weeks and finding faults in each screen.

The keywords used in the name of the application have the greatest weight. Here you have two ways: on the side of good and on the side of evil. Real Jedi give their application a unique name, make a brand out of it and promote it, as well as at the expense of the quality and usefulness of their application, in order to become leaders by so-called «brand inquiries». If you are still on the way to a Jedi dedication or you have many competitors, you can add two or three relevant keywords to the second part of the application name, separating it with a dash or a hyphen. It is advisable to make a meaningful phrase out of these words so that your ASO-efforts are not too striking to ordinary users.

The Google Play application description page is optimized according to the same ASO laws that apply to regular searches.

There is a suspicion that ASO descriptions will be even more useful if you simultaneously optimize the content of the application. This functionality was launched in the public domain not so long ago. Such promotion is suitable for a directory application or magazine, but it will be difficult to implement for a game with three screens and a leaderboard.

Representatives of the company promise mountains of gold to those who have integrated Google Plus, up to the special selection of the editors of Google Play. There are no real cases of the «golden mountains», if there are any, it will be interesting to discuss them.

This factor is positive anyway, especially if this video is good. On the other hand, if you have the opportunity to record a decent video, then, most likely, you have a good enough application, and you have already taken into account other issuing factors.

This is an indirect factor, which in itself is not related to ranking, but rather strongly affects the number of organic installs. Despite a large number of tools for previewing and A / B testing, this part of optimization still remains an art rather than a science.

Finally, three tips on how to improve icons and what works almost always:

Optimization of the description of applications is a cunning and long process in which success ultimately depends on the application itself. The main thing in this business is the adequate perception of your product, and also the readiness to cooperate and listen to others, be it the opinion of a despicable marketer, the assessment of the majority of users or, finally, Google analytics. It is for her to have the last word in all matters related to the optimization of the description on Google Play.