How Many Installs Do You Need to Reach Top in App Store and Google Play in 2019? 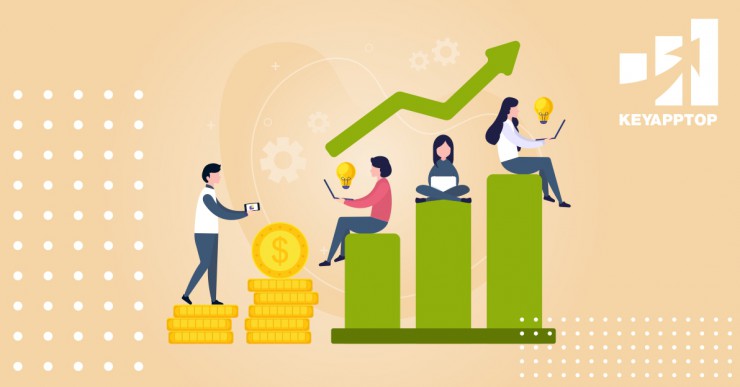 Mobile games have required 47 percent more downloads to reach No. 1 on the U.S. App Store’s top game charts so far in 2019 than they did during the same period in 2016, Sensor Tower Store Intelligence estimates show. It has taken approximately 174,000 downloads for a game to top the ranking on a given day this year, 85 percent more than the 94,000 installs required for a non-game app to reach No. 1 on the app charts. Meanwhile, the median number of installs required for an app to reach No. 1 among other non-games has decreased 31 percent.

In this report, we investigate how the requirements to reach the No. 1 position in App Store and Google Play rankings have changed over time, in addition to what’s needed to make the top 10 on each store in 2019.

This suggests the U.S. market for top social and messaging apps such as Facebook and Messengerhas become more saturated, with downloads for these top apps decreasing over time. In addition, no app has found the same level of success that Snapchat and Bitmoji had in 2016 and 2017. Facebook’s Messenger had five million U.S. App Store installs in November 2016 while Snapchat and Bitmoji also surpassed five million installs in a single month (March 2017 and August 2016, respectively). Since March 2017, no non-game app has exceeded 3.5 million downloads on the U.S. App Store during a single month. 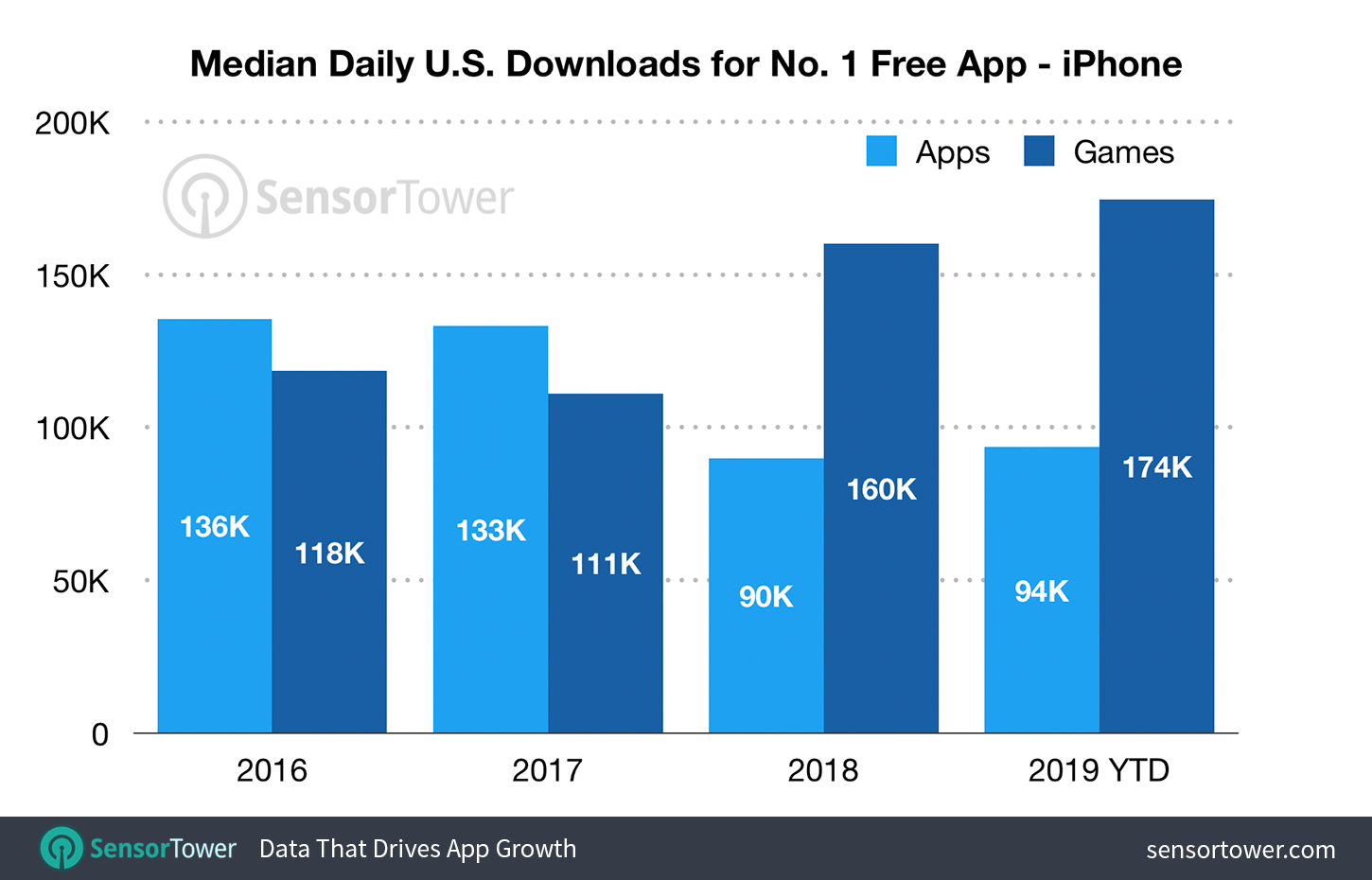 The decline in downloads required to reach No. 1 on the U.S. Top Free Apps chart on Google Play was even more extreme than for the iPhone chart, with the median daily downloads for the top non-game app decreasing 65 percent from 209,000 in 2016 to 74,000 so far in 2019. While total U.S. non-game app downloads on Google Play fell slightly during this period, the decrease was primarily concentrated among top apps such as Messenger, Facebook, Snapchat, Pandora, and Instagram. For example, the top app during this period, Messenger, saw yearly installs decline about 68 percent from nearly 80 million in 2016 to 26 million in 2018. 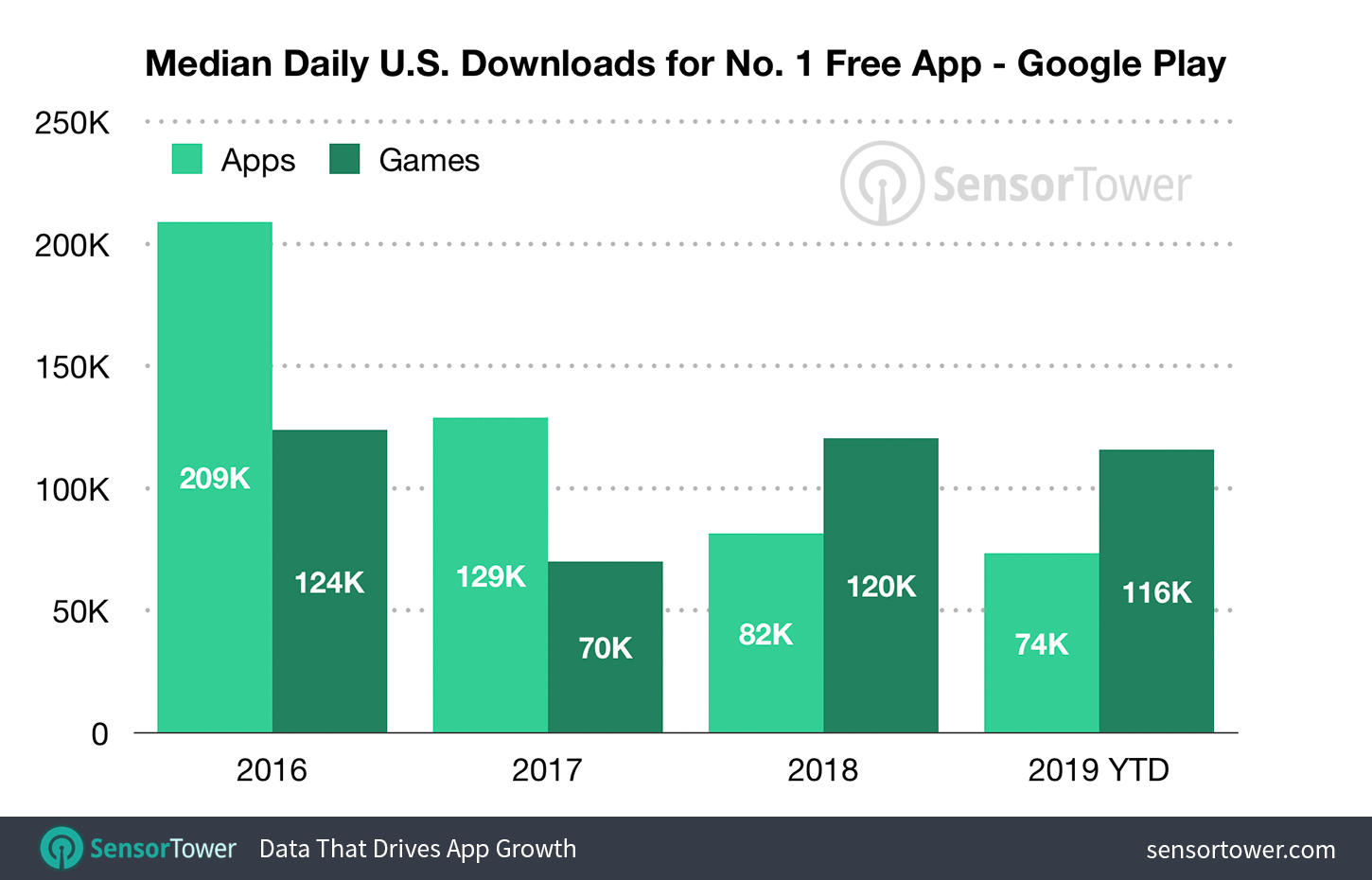 In contrast to the Top Free Apps chart, the rise of hyper-casual games has made it increasingly difficult to reach No. 1 on the iPhone Top Free Games chart. So far in 2019, games have needed around 174,000 downloads to reach the No. 1 spot on the U.S. Top Free charts on a given day. This represents an increase of 47 percent compared to the median daily downloads of 118,000 for the top game in 2016.

Top game growth was even greater than the 40 percent growth for overall U.S. iPhone game downloads between Q1 2016 and Q1 2019, meaning that it is more difficult for games to reach No. 1 even relative to the expanding game market in the U.S. A total of 28 unique games have reached the top spot in 2019, with hyper-casual games making up all but four of these. Of the four non-hyper-casual games including Harry Potter: Wizards Unite, Dr. Mario World, and BTS WORLD, only Harry Potter: Wizards Unite spent more than one day at the top of the charts. Meanwhile, popular hyper-casual hits Colorbump 3D from Good Job Games and aquapark.io from Voodoo have spent 30 and 25 days at No. 1 this year, respectively.

On Google Play, hyper-casual games have kept the median downloads for the No. 1 game largely consistent while overall U.S. game downloads on the platform fell. The median daily installs for the top free game on Google Play increased from 70,000 in 2017 to 116,000 so far in 2019, or growth of 66 percent. Meanwhile, overall game downloads on the platform decreased 16 percent from 646 million in Q1 2017 to 544 million in Q1 2019. 21 out of the 23 games that have reached No. 1 so far in 2019 are hyper-casual titles, including Words Story from Great Puzzle Games and Traffic Run from Geisha Tokyo.

Downloads To Reach Top 10 in the U.S. 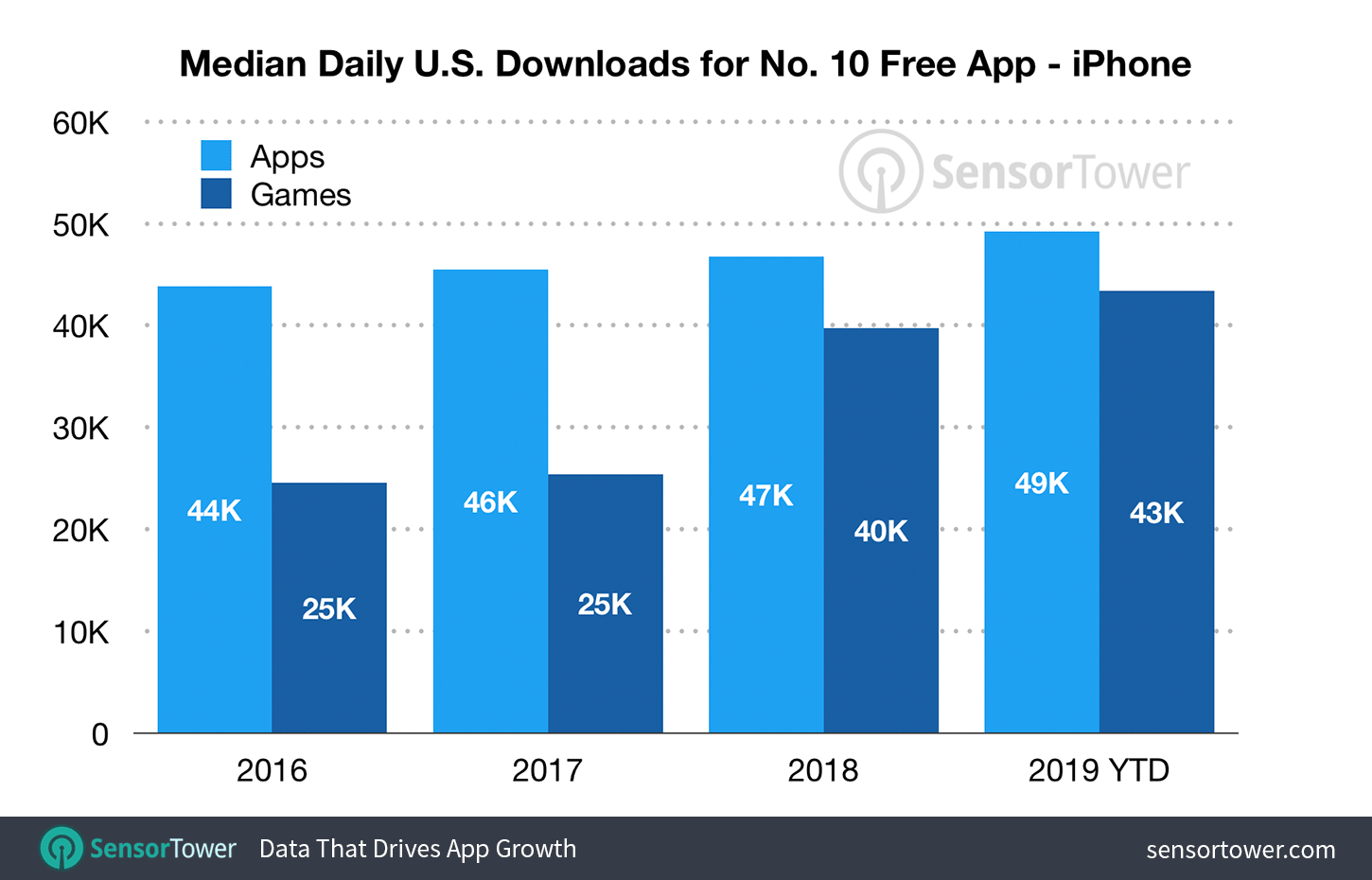 For games, download growth for the No. 10 ranked app in the U.S. was even greater than the growth for the top game. Median downloads for the No. 10 game on the App Store nearly doubled from 25,000 in 2016 to 43,000 so far in 2019, and Google Play saw 26 percent growth from 27,000 to 34,000 over the same period. While hit games including Fortnite, PUBG Mobile, and Brawl Stars have frequented the top 10, the top charts have been flooded by hyper-casual games from publishers such as Voodoo, Good Job Games, and Playgendary, making it increasingly difficult for mid-core and hardcore games to reach the top charts. 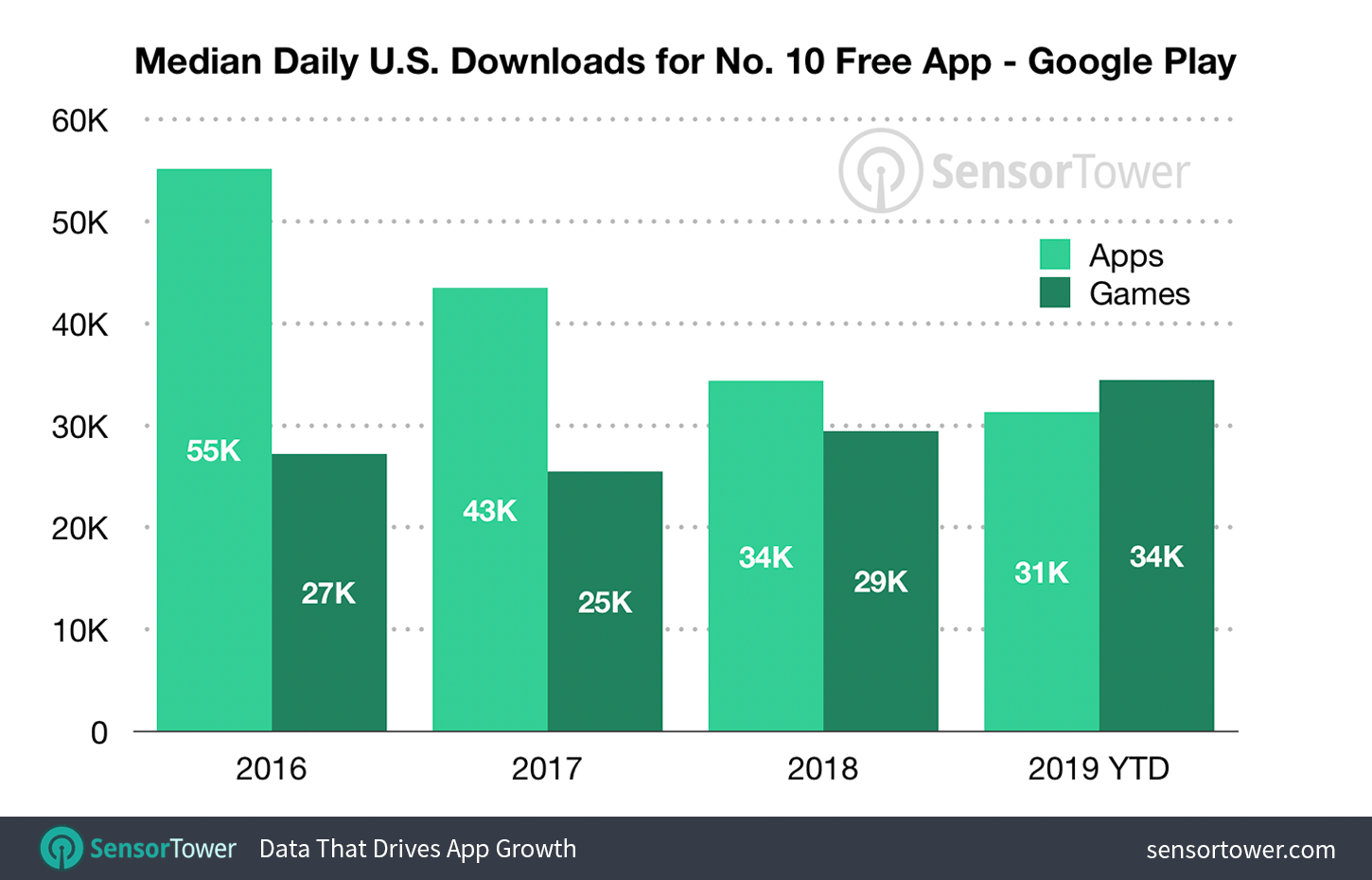 Top Categories by Downloads to Reach the Top 10 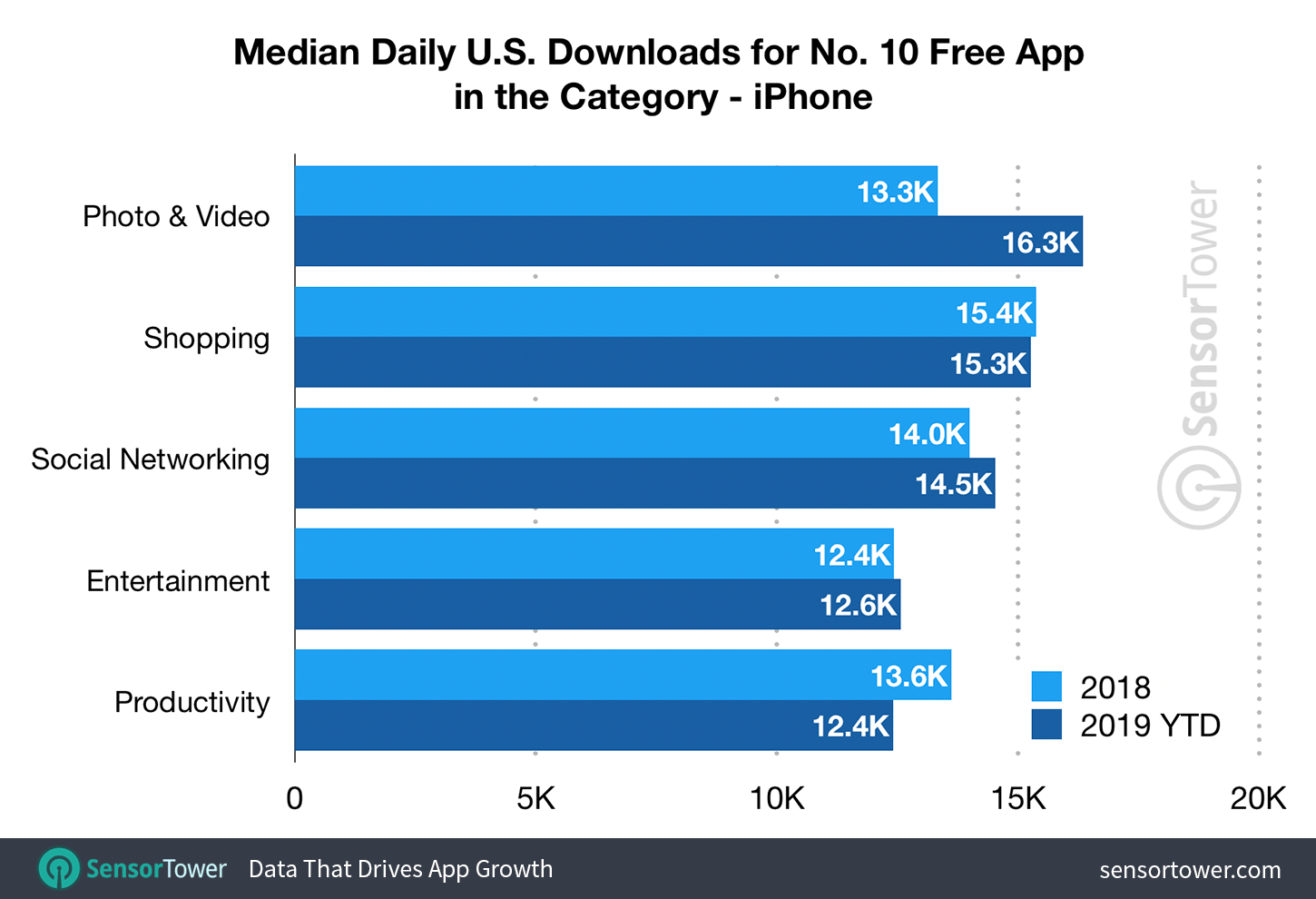 On Google Play, Entertainment is the largest category outside Games so far in 2019 in the U.S., led by apps like Netflix, Hulu, and Bitmoji. An Entertainment category app needed around 17,100 U.S. installs in a day to reach the top 10. Making the top 10 was easier for apps in the Shopping category, with a median of 10,800 downloads for the No. 10 app. This was followed by the Social, Music, and Finance categories. 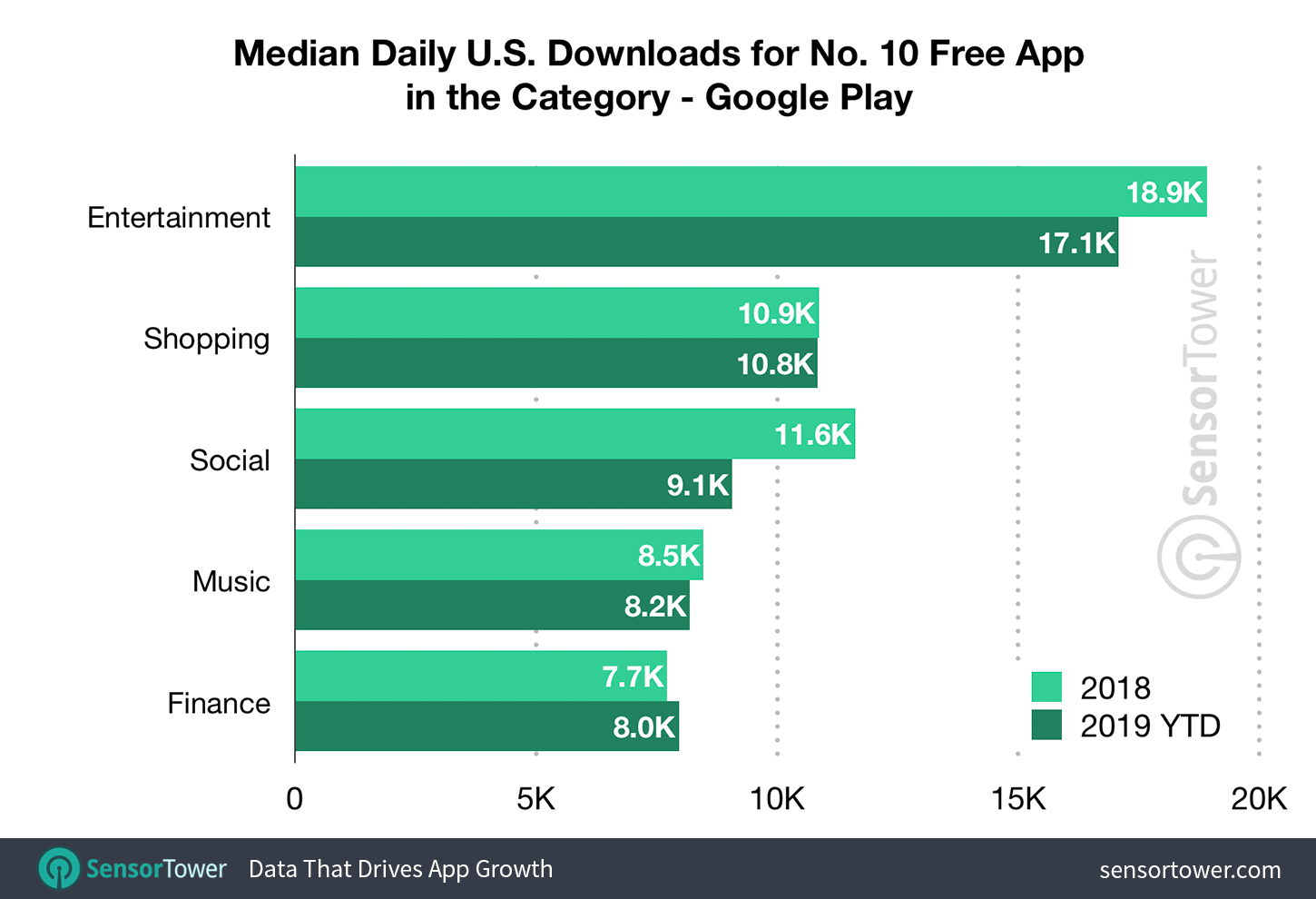 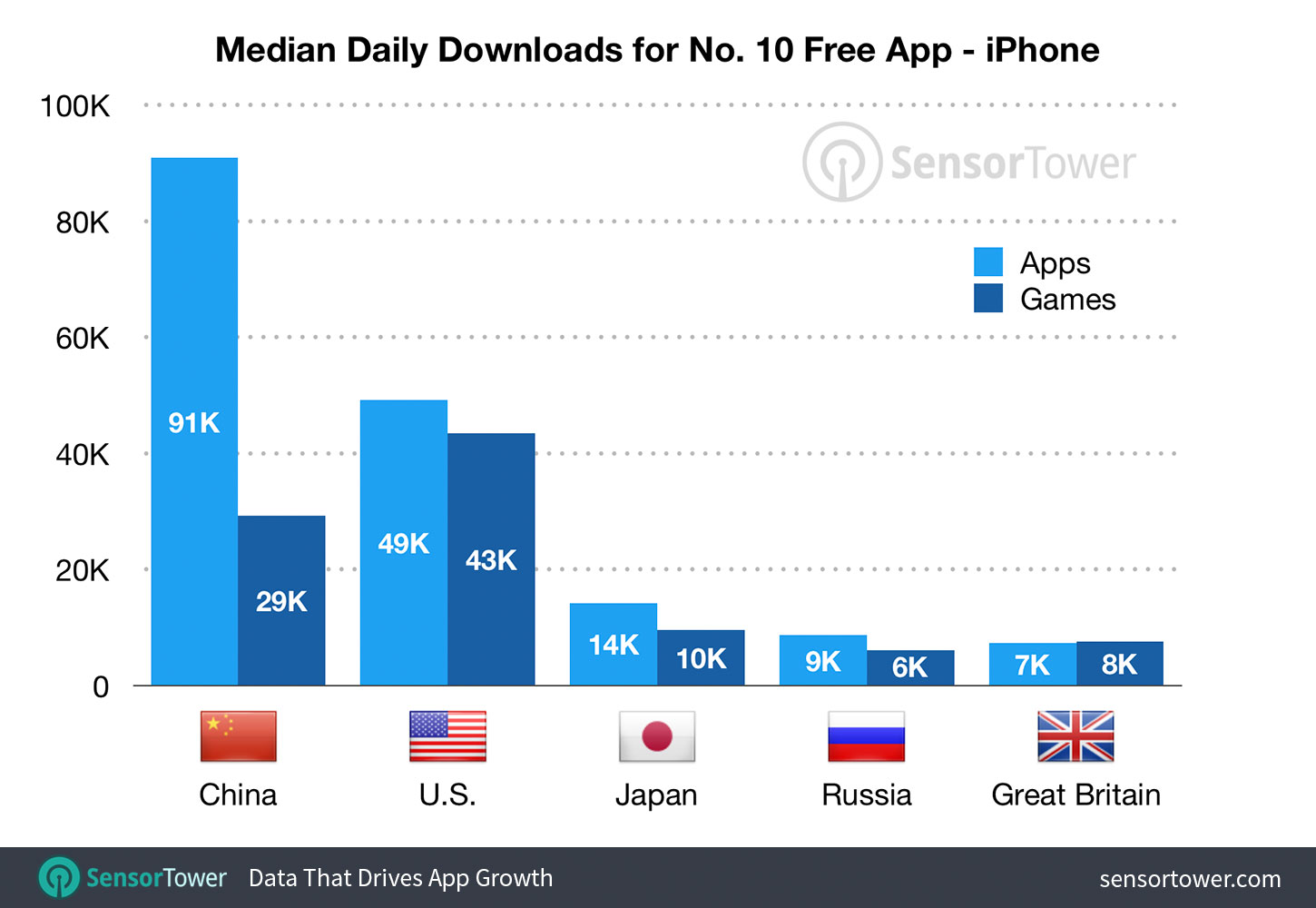 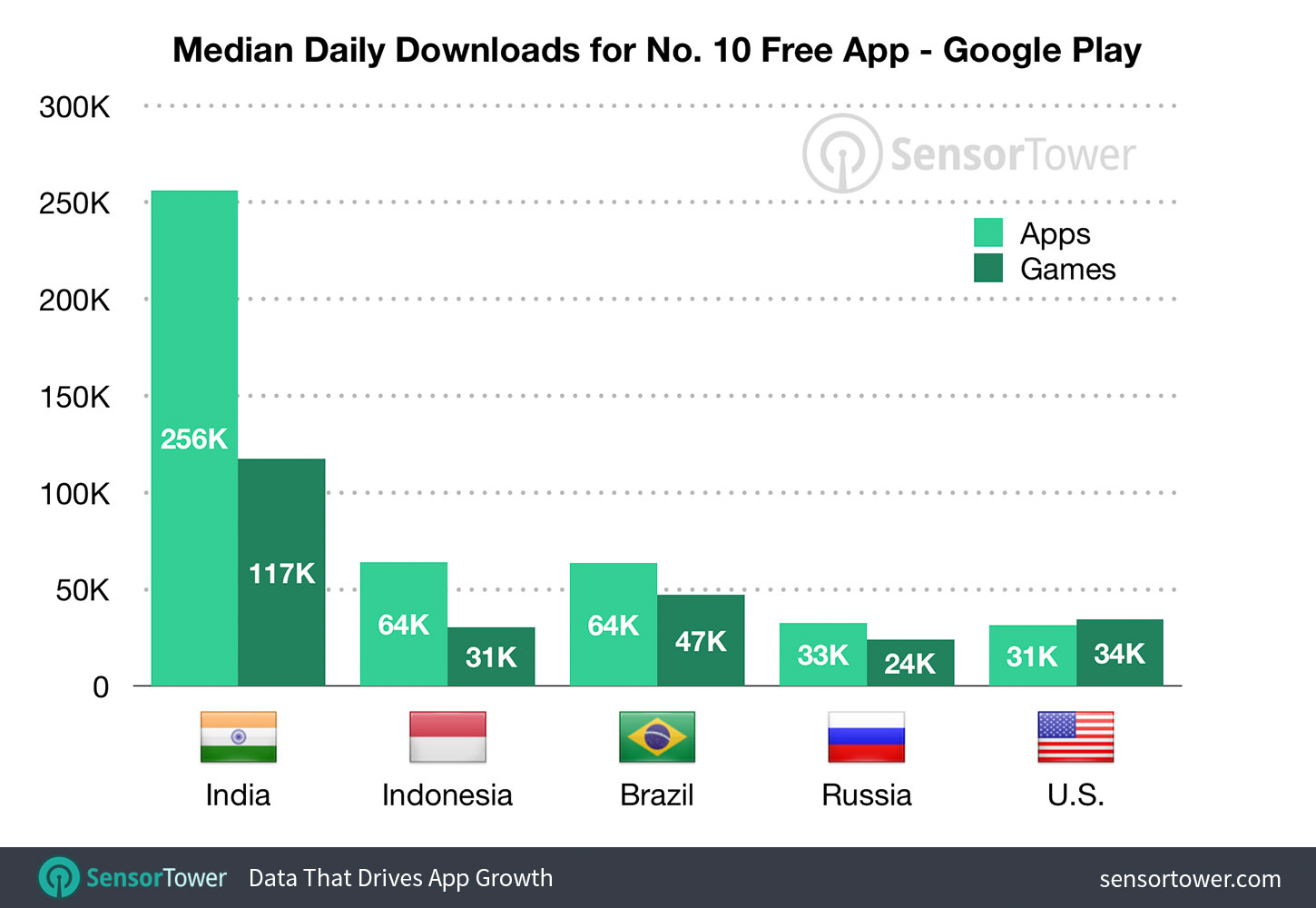 With the U.S. app market becoming increasingly saturated in recent years, top non-game apps have not been as dominant as they were in the past. This provides more apps with the opportunity to rise to the top, especially on Google Play where downloads for the No. 1 app have decreased 71 percent from 2016. The story is different for games, where the growing popularity of hyper-casual titles has made it more challenging than ever to top the charts. We’ll be monitoring to see if these trends continue throughout the second half of 2019. 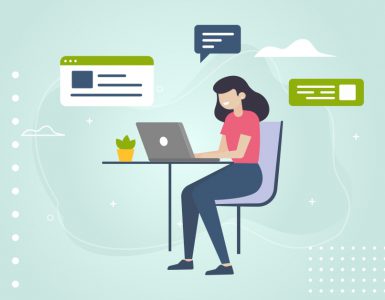 The number of mobile device usage scenarios is growing, and more and more people are using them not only for entertainment and content consumption, but also for paying for merchandise, services, and solving a variety of work-related tasks. I have... 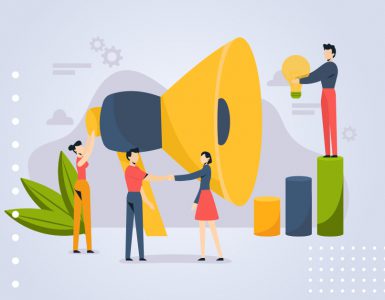 There Are Changes in App Ratings on Google Play

At this year’s Google I/O conference, big changes were announced around how Google Play Store app ratings work. These changes are similar to the changes ushered in by iOS 11 two years ago. Now, in both app stores, review recency matters more than...

What if I can’t add money?

How can I track your work?

Will the users open my application?

How long my app will be ranked?

Will Google Play bann my app?

What should I do if I don’t see my installs?

How long it will take to see the result?

How many installs I have to order?

How long I have to promote my app?

Do you have bonuses?

FAQ: How to rank for the keywords I’m not ranked for?

The Most Popular Android Games of All Time